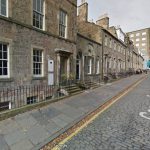 The entrance of the CSU Chaplaincy in George Square

in my heart the traces, the places but most of all, the people that I’ve met during that wonderful moment of my life.

Sean Cartwright was one of the most interesting, crazy and joyful guys that I’ve met in Scotland and probably in my entire life.

I need to be sincere: I’ve probably talked to him not more than 20 or 30 times, but still he’s had so much influence in my life that I just couldn’t expect.

When, 2 weeks ago, I read this touching article by Rob Peacock – who I thank from the bottom of my heart – I could not believe what I was reading.

It’s true: since I left Edinburgh I came back there in 2001 and probably also in 2002 and I’ve talked again to some of the people I’ve met in 1999, but after 2002 I’ve lost almost all the contacts with many of these friends.

But Anyway I can definitely say that Sean has touched my heart and I believe that he still influences me in my everyday life especially regarding my artistic feel.

Nevertheless I was surprised for how much I’ve cried thinking about him, about his way of inciting me in expressing my weak poetry, about his incredible skill in writing poems and in expressing visionary concepts and ideas. 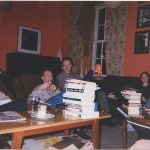 An evening @ the Live Poets Society

During our meetings at the Common Room in the Catholic Students’ Union Chaplaincy I’ve enjoyed his poems and I took from him a lot of positive energy.

In the past two weeks I’ve tried to understand why I was so sad for his departure and, talking with my friends, I’ve focused on the deep reasons of my sorrow. One explanation can be that Sean has probably been the first person who has really believed in my artistic talents. When I arrived in Edinburgh I was much concerned about the fact that I could not play music, because I did not have any instrument with me, and most of all because I did not have any person to share my passion.

Fortunately I’ve met Father Tom Kearns and all the people at the CSU and I’ve started to frequent the Live Poets Society. Poetry became for me the main way to express myself, but I was very inexperienced and I just did not know where to start from.

Sean was the first person, together with my friend Paul Campbell, another wonderful poet, to push me towards poetry and to help me entering this world that was quite unknown to me.

Some other friends, after having heard my recollection about Sean, told me that probably I was so sad because I’ve lost a part of me.

Well, I can surely say that this is really true. I haven’t heard about Sean since 2002 but still his strength was inside of me. After that I’ve came back from Scotland, I started my most prolific artistic projects: the first CD with “Will o’ the wisp” in 2003, and all my celtic “career” that I’m still following, than another CD in 2005 and another one in 2010, still with my celtic project. But I can say that my love for music and traditions that I’m nurturing even now, with the upcoming CD of La Serpe d’Oro, are a fruit of Sean’s urge.

That’s why I want to give custody of these thoughts to the internet, because I want everybody who knows 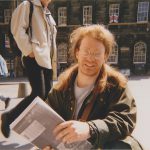 Me during my Erasmus Exchange Program in Edinburgh

me, to understand who was Sean to me: a friend, a guide, a wise bigger brother.

Good bye Sean, and thank you for your inspiration.